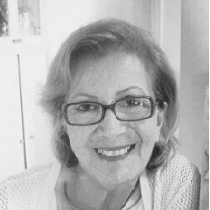 Eleni Boutou-Lebessi was born in Heraklion, Crete in 1949.

She spent her childhood in Heraklion and Athens and then she studied at the School of Architecture of the NTUA from which she graduated in 1972.

During her studies she worked in private technical   offices and participated in 2 Architectural Competitions.

From 1972 to June 1980 and partially until September 1985 (when she became permanent in the State) she practiced Freelance, for Study & supervision of a large number of private projects, and thereover she participated in architectural proposals for the projects of  her family’s Engineers (mainly of her husband).

From 1980 she worked at the Ministry of Defense, with private project contracts, while in 1985 she had a permanent contract with it.  She worked in the Public Sector for 28 years, until her retirement in 2008, and for 13 of them in  positions of responsibility (Director and head of department at the Ministry of Internal Affairs and Urban Planning).

She participated in relevant scientific and administrative committees and councils as a member or chairman and gave many speeches and lectures. At the same time, she was involved in writing Books on Town Planning Legislation, Building Uses, GOK 85 (General Building Regulation)85 , and NOK (New Building Regulation), in which, in addition to thorough codification of the Legislation, she also developed important interpretations.