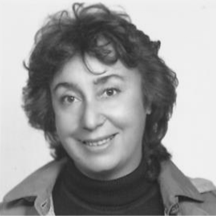 Helen Gkousi – Desyllas was born in Chalkis in 1938. The family name originated from Corfu.

Ιn 1965 she obtained a diploma in Architecture from the National Technical University of Athens (NTUA) (1955-1960).

She married Nikolaos Desyllas, architect, in 1964 and had four children.

From 1965 to 1968 she joined the teaching staff of the NTUA School of Architecture as assistant at the Chair of Building Science (Professor Th. Valentis).

Main project of this period are:

In 1996 she participated in XIX Triennale Milano, International Architecture Exhibition, where drawings and photos of the Archeological Museum of Chios were presented.

From 1975 to 2003 she worked as a freelancer, collaborating in many projects with Efi Vrontisi, architect. Projects from this period are several private houses and office buildings as well as 2 vacation house complexes, one at Rethymno, Crete and the other on the island of Spetses.

At the same time, she turned to new paths of personal expression. Through her painting and poetic pursuits she wanted to marry the two arts in her works. She liked to use color to evoke emotion in her verses and to draw abstract shapes inspired by words.

She is a member of the Greek Association of Architects and elected Vice President for one term in the ’90s.