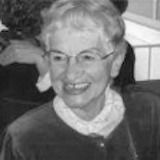 Dimitra (Toula) Katochianou, née Kostopoulou, was born on the 26th of April 1932 in Pyrgos, Ileia, Greece. Both her parents were teachers of classical studies. Her father with origin of Ileia, her mother from Attaleia of Asia Minor, from where she came to Greece as a refugee in 1922.

In 1947 the family moved to Athens, where they settled down permanently. Dimitra Katochianou’s decision to study architecture and engineering greatly surprised her environment. In 1950, after a casual enticement on the part of a relative of hers, she found herself a student in the National Technical University of Athens.

Upon her graduation from the National Technical University of Athens in 1950 she was employed by the Doxiadis Office in Athens in the ekistic study and in the city and area planning in Iraq and Pakistan (1955-1957). That is where she met the civil engineer Nikos Katochianos, who worked for the Office, and whom she married in 1958.

She and Nikos followed a common course in their post graduate studies, and they were awarded the Diploma in Ekistics by the Athens Technological Institute (1958-1959). With scholarship awarded by I.K.Y (State Scholarship Foundation) they followed post graduate studies in City and Regional Planning at the MIT (Massachusetts Institute of Technology) in Boston, upon completion of which they were awarded the master’s degree in City and Regional Planning (1960-1963). Dimitra and Nikos continued also a post graduate study and application level at the Joint Center for Urban Studies Harvard-MIT with specialization in the aesthetics of Sequence Design in the various space scales and in arts in general (1963-1964).

The couple returned to Greece in 1964. When the Centre of Programming and Research was created at the Ministry for Coordination in 1965, both were integrated in a “command” team consisting of city-regional planners, in order to devise and prepare a series of long and medium term programs for the regional planning restructuring of the whole country, for the network of cities and rural settlements, and special zones and sites. (1965-1990). When the afore-mentioned Centre was turned from a Public Entity into a Private Entity in 1990, they went on with participations in regional planning studies carried out by private offices and with presentation of their works in Regional Planning Conferences (1990-2005).

Although Dimitra Katochianou was one of the most eminent city and regional planners in Greece, as from her graduation from the Athens Technical University and up to the end of her days, she designed buildings, and marked a personal course in Architecture for fifty-five years.

She experimented also in scenography and in costume design. She strongly believed in the force of woman’s nature, and she put forth this belief of hers in her biographical book Vassiliki, Dimitra, Eleni. She worked with tireless industriousness and unconditional honesty up to the very last day of her life (2015).

Dimitra and Nikos Katochianos had two daughters and lived the greatest part of their family life at their home in Aghia Paraskevi.