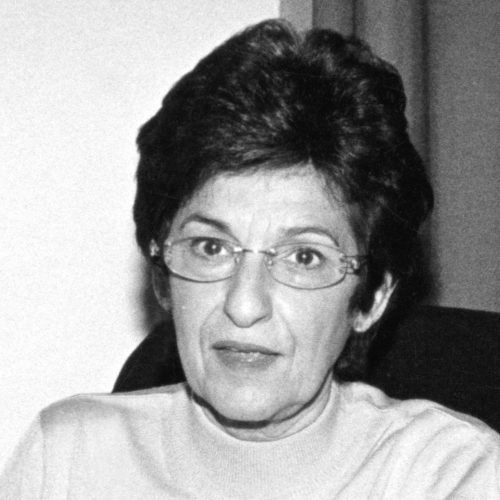 Employed under annual contract at the Architectural Department of the Hellenic Railways
Organization (headed by N. Desyllas) 1968 - 1969

Born in Volos, Greece in 1943. Studied architecture at the National Technical University of Athens (1962-1967) and was awarded a Ph.D. with honors from this Institution. She taught courses in the History of Theatre Architecture and Stage Design at the Department of Theatre Studies of the National and Capodistrian University of Athens (NCUA) as an elected faculty member (1994: assistant professor, 2000: associate professor, 2004: full professor). Married to civil and hydraulic engineer Dimitri St. Fessas, has two children, Stavros and Antigoni.

After graduation she worked at the collaborative Architectural Office 19/57 on a tourist complex project of Antonis Lambakis and at the Architectural Department of the Hellenic Railways Organization, directed by Nicos Desyllas, on various building and interior design projects. Soon, however, her inclination for theory led her to the fields of research and historiography of Neohellenic Architecture. Late 19th c. and especially 20th c. architecture in Greece were approached in their historical and cultural context as well as in relation to contemporary world architecture. The first topics of her research activity in Greece and abroad were ideological issues and public buildings with an emphasis on cultural facilities and theatres. Since 1980 her research focused on the work, training and personality of Greek architects of the 20th century. Her publications are based on primary research –study of archival sources, on-site documentation of buildings–,but also on interviews with architects and users of their works.

More than 100 scholarly articles and research papers of hers have been published in Greek and foreign journals, conference proceedings, encyclopedias and collective volumes. She authored (or co-authored and edited) twenty one books on public buildings, outstanding Greek architects, architectural history and theory and performing arts. Her most important books are the two-volume treatise Theatre Architecture in Modern Greece, 1720-1940 (1994, Academy of Athens Prize), the research book Hellenic Architectural Society. 20th Century Architects, members of the Society (editor and principal author, 2009, Potamos Publishers), the monograph Aristotelis Zachos& Josef Durm. The correspondence between a pioneer architect and his mentor, 1905-1914 (2013, Potamos Publishers), the treatise Basile Courémenos, Architect (2017, Academy of Athens Editions) and the five bilingual books (full text in Greek and English): Ideological and Cultural Issues in the Architecture of Modern Greece, 1827-1940 (1987); Public Architecture in Modern Greece, 1720-1940 (1993, Papasotiriou); Essays on Neohellenic Architecture (2001, honourable mention by the International Academy of Architecture / Interarch, 2003); Twelve Greek Architects of the Interwar Period  (research book in collaboration with Emmanuel V. Marmaras, 2005, 2013, Crete University Press); and Pericles Sakellarios, Architect [1905-1995](in collaboration with E. Sakellariou-Herzog, 2006, Potamos Publishers).[i]

She participated in the 5th International Exhibition of Architecture of the Biennale di Venezia (1991) as Greece’s curator, responsible for the exhibition New Public Buildings by S. and D. Antonakakis, A. Tombazis and N. Valsamakis; edited the exhibition’s catalogue and wrote a critical introduction to public architecture in Modern Greece.

In 2002 she was responsible for the research and writing of all the texts of the Greek participation in the CD-ROM «Discovering contemporary architecture in Paris, London and Athens», which was produced in three languages –French, English and Greek- by the French firm ARVHA, the British firm Anne Thorne Architects Partnership (ATAP) and the Greek firm “Omada 80” Consulting Architects and Urban Planners – Sotiris N. Papadopoulos, under the European Union’s “Culture 2000” program.

From 2005 to 2012 she was a scientific collaborator at the Bureau of Architectural Research of the Academy of Athens. As secretary of a committee chaired by Academician George P. Lavvas, she participated in the international research project Balkan capitals from the 19th to the 21st century. Urban Planning and the Modern Architectural Heritage (2005-2006).

Her essay “Modernization and Originality within the Classical Tradition: The Work of Architect Basile Courémenos in Istanbul, 1911-1915” was published in the collective research and publication project Greek Architects of Istanbul in the Era of Modernization (2010), edited by Hasan Kuruyazici and Eva Sarlak.

She participated in the research project CIAM IV. The Functional City, which was a cooperative venture of the gta Archives -ETH Zurich and the EFL Foundation in The Hague. Her research article “Greece: The History behind the Myth” was published in: Harbusch G., Somer K., Weiss D., van Es E., Pérez M., (eds.) Atlas of the Functional City CIAM IV and Compαrative Urban Analysis, Thoth Publishers – gta Verlag, Busum, Holland 2014, p. 208-221.