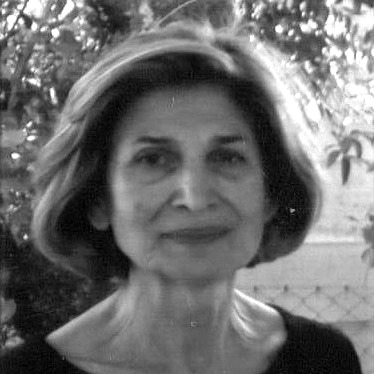 University of Naples, Department of Architecture 1957 - 1959 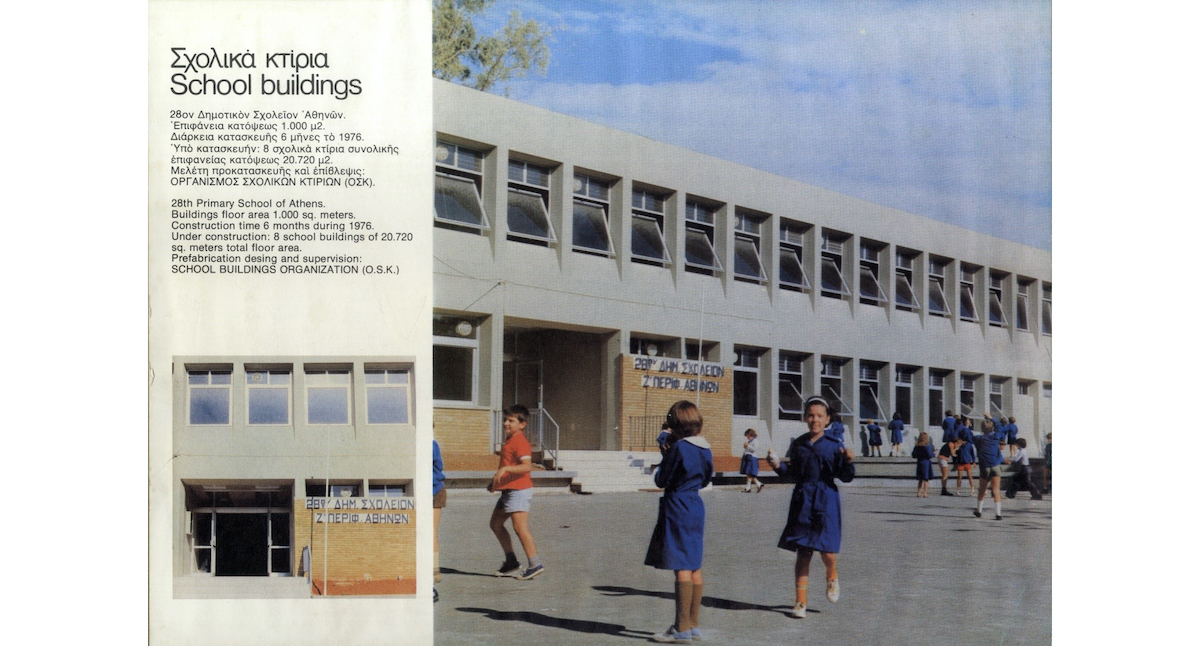 Graduate of the NTUA School of Architecture in 1963. Degree Thesis in Urban Planning under the title ‘Regional Planning of the Peloponnese’ (teamwork, grade Excellent).

Worked principally in the public sector.

She designed types of single and multi-storey residences, and also a project for a Shopping Centre in the framework of the urban plan of Papagou Officers Housing district.

Her service at the SBO in various positions of responsibility, contributed to meeting the great needs for housing students in that period. While work included design and standardization of school units of conventional construction, a very important innovation was the design and construction of schools using industrial prefabricated units.

Argyrenia Papazoi – Charoni participated in the implementation of the annual program of the Ministry of Education for the design and construction of school complexes throughout Greece. She was head of the Design Department of Conventional Projects and was also responsible for the supervision of studies outsourced to private bureaus and checking of ‘bioclimatic schools’ studies.

As head of the study group for School Unit Types of conventional construction, she designed the Types of 12-classroom Elementary School and 9-classroom and 12-classroom High School, thus implementing a previous research project.

To improve student safety, she made a film about city schools in cooperation with director M. Arvaniti of National Radio Television and collaborated with Municipalities and the Ministry of Environment and Public Works on the construction of pedestrian sidewalks at school entrances.

Argyrenia Papazoi – Charoni participated in the study group on types of industrialized construction of 6-classroom to 30-classroom school units. The prefabrication system used was successful in terms of high resilience to earthquakes, low cost and speed of construction. Moreover, the lightweight soundproof partition panels allowed the flexible use of space depending on the educational needs.

The ‘new’ school buildings made of visible concrete, conspicuous bricks, glass bricks and colored compositions, stood out from the surrounding buildings and became a landmark for each district. They were considered “friendly” by students and teachers (see article “Contemporary School” by Irida Panagiotopoulou in the Technical Journal).

Following the disastrous 1978 earthquake in Thessaloniki, when many of rented school buildings were destroyed, a local branch of MEKAVE was set up under her direction to handle the urgent needs for school units. In a short period 160 classrooms were built with the existing industrialized system on state owned land and 360 classrooms of light prefabricated “Removable – Transportable” structures were placed in abandoned plots. Using the light prefabrication system, 28 more classrooms were built in Athens as a response to urgent needs.

As Head of the Directorate for Inspection and Survey of School Buildings, she worked on specifications with the Hellenic Standardization Organization (ELOT) for the prevention of accidents in the open -areas of school units.

Participated as Educational Advisor in all stages of the urban planning projects for the creation of new settlements of Komotini, Xanthi, Sappes, Thebes, Haravgi and Lavrio municipalities by the National Real Estate Bank.

She cooperated in the surveys for the construction of the Piraeus Technical University with the architects V. Dalipi and E.  Stamatopoulou.

Taught Architecture and Elements of Construction at the Athens Higher School of Technological Engineering and at the Centers of Higher Technical and Professional Education aimed at the technical training of middle level executives.

Seconded to the position of Head of Development and Renovation of the MFA buildings in Athens and abroad. Succeeded in housing the MFA services in Athens in the same building block, upgraded state owned buildings of missions abroad, identified and recorded hitherto unknown donations to the Greek state by diaspora Greeks.

Redevelopment of MFA buildings in Athens

Assessed the space needed by the Ministry services and proposed to the State Real Estate Company (KED) that the Ministry services be consolidated in public buildings within the block demarcated by Zalocosta, Kriezotou, Acadimias and Vas. Sofias streets, in accordance with the Athens Land Use Plan. Two public buildings (1 and 3 Zalocosta street) were acquired, two wings of the building on 10 Criezotou street that belonged to the Army Equity Fund (MTS) were maintained and the purchase of the former Astir Hotel on 1 Vas. Sofias str. was pursued. Extensive renovation was carried out by KED on the Zalocosta st. buildings, including the establishment of a modern library on Greek – Turkish relations. In addition, renovation of the 5 Vas. Sofias and 2 Zalocosta main buildings included an internal interconnection. The pedestrianization of Zalocosta street, from Vas. Sofias to Kriezotou, was designed and carried out with new utility networks and the site was decorated with the placement of the bust of the Ambassador, Poet and Nobel Prize Laureate George Seferis. The project was completed on time for the Greek Presidency of the EU during the second semester of 1988.

Renovation of the buildings of Greek Diplomatic Missions abroad

Information was gathered about properties that had been donated to Greek Missions abroad by Greeks of the Diaspora, so far unregistered. Seventy-five (75) title documents= deeds relating to a large number of properties from various countries were found and registered. An example of the  benefits of the project was the case of Madrid where all Greek government services were accommodated in a complex built through international tender on a piece of land donated to the Greek state in 1936. In Geneva the offices of the Permanent Representation to the UN and the residence of the General Consul were also accommodated in a building donated to the Greek state.

She also participated as representative of the MFA in the team of the Ministry for the Environment which defined the specifications for the use of buildings by disabled persons and their incorporation into the General Building Regulation.

Ministry for the Environment, Spatial Planning and Public Works (1993-1996)

She contributed on projects for the implementation of EU policies in the areas of protection of coastal zones and the management of natural environment, mainly on Greek islands.

She promoted energy saving programs in existing buildings as well as specifications for new constructions. To mitigate the visual pollution of aerial electrical networks in traditional settlements, an agreement with the Public Electricity Company (PPC) was reached for their undergrounding through compensatory arrangements.

She participated in integrated urban planning projects for the protection of historical monuments, as well as mitigating the effects of traffic congestion and visual pollution in traditional settlements.

In this context, she contributed to the project for the protection of the Byzantine Monument of  Ekatontapyliani by creating a network of pedestrian sidewalks and the unification with the Archaeological Museum of Paros; in the landscape design of the Cave of St. John the Theologian of Patmos to celebrate the anniversary of 1900 years since the writing of the Apocalypse; in the restoration of the St. George Monastery Complex at Marpessa on the island of Paros, which was recognized as a Cultural Heritage Monument by UNESCO.

Coordinated the creation of an extensive database of cultural and environmental information for the Aegean islands, a necessary planning basis for the protection of their identity through EU programs. She contributed also to the drafting of a specific program for the ecological development of the very small islands of the Aegean.

In Mytilene she participated in the listing of 120 buildings on Ermou street, a project that was integrated into an EU Program and was carried out by the Municipality of Mytilene.

On Chios, she oversaw the project of surveying and projecting the ecclesiastical monuments of the historic Anavatos township, the inclusion of the engraved exteriors of Pyrgi buildings in an EU Program, the listing of the house of Captain Yannis Livanos as a protected historic monument.

She participated in the team responsible for setting up the Greek Pavilion in the 1998 Lisbon World Expo and in organizing the events for the celebration of the Greek Day. She organized the Exhibition “Nautical Maps of the Aegean 1482-1800” from the collections of Margarita Samourka and Christos Zacharakis at the Zappeion Megaron as well as the multiple presentation of the exhibition “Nautical Tradition in the Aegean”.

She participated in the registration of some 500 properties in Plaka, Keramikos, Plato’s Academy expropriated by the Ministry, a small number of which were used as offices or were granted to foundations. For the unused properties she suggested their utilization either by the TAP (Archaeological Resources Fund) or to cover the housing needs of the Ministry itself.

She contributed to the reshaping of the ground floor of FIX building and the organization of the Exhibition ‘Giannis Tsarouchis ‘Between East and West’ which led to the temporary and then the permanent concession of the building owned by Metro SA to the then newly established National Museum of Contemporary Art (EMST).

She also collaborated with the Society responsible for the Unification of Archaeological Sites, in the selection of paving solutions for the pedestrianization of the emblematic Dionysiou Areopagitou & Apostolou Pavlou streets under the Acropolis.

She contributed to the coordination related to locating Olympic projects in the Metropolitan Complex of Athens.

Participated in the organization of celebration events for the arrival of 2000 –the new century– on the Acropolis.

During her term at the MFA, she cooperated in setting up the Exhibition in Tashkent on Alexander the Great and in organizing the 20 years celebration of Greece joining the EU in Zappeio Megaro.

She designed private buildings, some of which are indicatively mentioned: